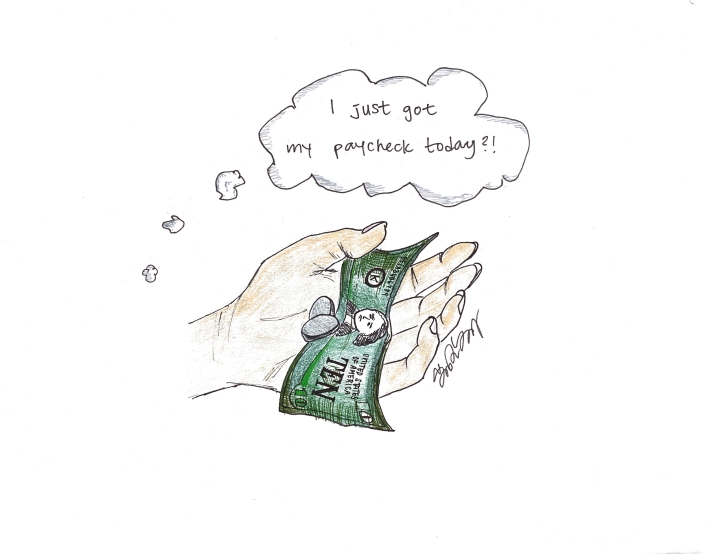 Receiving your first paycheck is one of the most amazing experiences that a person new to the workforce can endure. After doing all the calculations, you only have enough money to pay taxes and insurance.

This is the harsh reality that many Americans working for minimum wage have to face. With the national average minimum wage of only $12-$13 an hour, it is difficult for people who receive the bare minimum to buy necessities such as food, shelter and clothes. Think about it: after you stash away money to pay for your medical and other insurance expenses and taxes, you only have so much left to buy food and clothes.

If you work for about nine hours every day on minimum wage, you only earn about $108-$117 per day. To a small child that may seem like a fortune, but in reality, it is just not enough to live on your own.

Furthermore, the prices of necessities to live have also risen in the past years. For example, a bowl of ramen can now go up to as high as $12. Taking this into consideration, many people that are given minimum wage can not afford to buy enough food to stay well-nourished.

Meanwhile, Consumer News and Business Channel (CNBC) Make It,— a new section of CNBC dedicated to helping you manage your business, career and money, interviewed participants and found out that many parents and/or guardians stress about where to spend money on.

Additionally, Dougleshia Nicholson is a single mother of six trying to survive on minimum wage in Kansas City, Missouri.

“It is stressful because I basically have to pick and choose what’s more important,” Nicholson tells CNBC Make It. “Of course my child is more important, but at the same time, I have to work and make money to be able to support and take care of them.”

Every year there is a nationwide debate about raising national minimum wages. Increasing the minimum wage obviously has a massive effect on the country’s economy and its people.

Some experts say that raising minimum wages can improve the lifestyle of those employees who are under the poverty line. They believe that raising the minimum wage will raise the overall net income of the working class and low-income families which will lead to greater financial stability.

In addition, raising the minimum wage would also increase worker productivity and reduce employee turnover. According to Janet Yellen, Chair of the Federal Reserve, increases in wages are associated with increased productivity. Alan Manning, DPhil, Professor of Economics at the London School of Economics, stated in 2014 that employee turnover rates and truancy tend to decrease as the minimum wage rises and work becomes more attractive.

A 2014 University of California at Berkeley study found turnover rates for teens and restaurant workers fall mainly following minimum wage inflation declining by about 2% for a 10% increase in the minimum wage.

Similarly, a survey given that same year found that 53% of small business owners considered that with a greater minimum wage, businesses would profit from lower employee turnover and raised productivity and consumer gratification.

Thus, a minimum wage should not force people to live at the bare minimum. Poverty is an epidemic that affects the whole nation and can fix in releasing financial pressure from its citizens.

This site uses Akismet to reduce spam. Learn how your comment data is processed.

Presenting: A very special final issue from our staff with the latest updates from COVID-19. Please check it out at the link in bio !! We hope everyone is staying safe during this difficult time.
Wildcats please stay safe during this difficult time! We will continue posting articles every Friday so don’t forget to look out for new issues! 🥳🐾
Last weekend, our Journalism program competed at the Eastern Los Angeles Journalism Education Program competition! Read more about it and the latest articles up on our website! Link in bio! 💻 🐾 Article by: @_carollie
Happy Tuesday Wildcats! Check out our new article featuring @allisoncautin, as well as many more on our website🐾 We will be printing newspapers next week as well! Article by: Adrian Hernandez
Happy Friday Wildcats !! Make sure to check out the latest and greatest new articles on our website!
Check out all of the super cute shoutouts at the link in bio! Thank you to everyone who supported us and have a happy Valentine’s Day! 💗💕💝💘💘